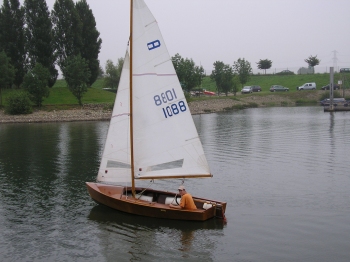 I must have been around 12 years old when I visited my cousin. One day they took me to one of the many lakes that you can find in the Netherlands for a sailing experience.
They owned a small open sailing boat (Schakel as far as I remember) and the plan was to do some sailing.
I ‘learned’ it the hard way when those lovely cousins thought it was funny to push me a little from the jetty and shout instructions to me how to get back. This included hoisting the sail and maneuvering back to them again.

VERY funny, I must say haha

But, I learned how to sail more or less that day. It’s maybe not completely pedagogical but definitely effective.

It could have remained like that, but no, I got hooked on sailing. Later I owned several sailing boats. From a small self built wooden Mirror Dinghy, an open plastic Flying Arrow Spanker and to make the Dutch family join me, a steel Wibo 835.

I also started reading a lot about sailing. About other adventurers like Eric and Susan Hiscock, Francis Chichester and similar alike.
This made me long for more, for exploring beyond the horizon, maybe faintly even to ‘sail around the world’. 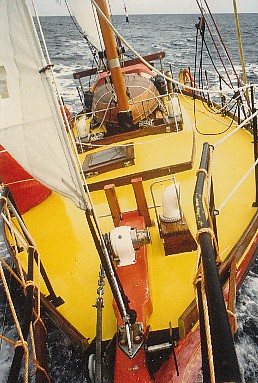 After finishing the hull, my German girlfriend and I did the rest of the job, except for the mast.

I investigated and found a design called C-mist, a Colin Archer type hull, designed by a Canadian designer. A real ‘blue water’ sailing boat. After contemplating on the cons and pros, I decided to have it built in ferrocement.
In Schiedam there was this company Ferrocem (what’s in the name haha) that was capable of taking the job to build the hull.

In the start of the eighties we started our ‘round the world’ trip. As it already was september and my girlfriend didn’t have any boating experience, we thought it was better to take it easy and motored the 1.200km via rivers and channels. It took us 6 weeks mostly standing in the rain and we used 160 locks and 7 tunnels to climb over and through mountains.

In Séte we discovered a new world. We met, for the first time, the people that, like us, were starting their adventure of boating life. Most of them were French. One couple we became really good friends with were the crew of sailing boat “Imagine”.

Back home, we had decided to do coastal navigation and stay in the Mediterranean Sea because of my girlfriend’s lack of experience.
Now, sitting in the cockpit of Imagine and drinking coffee, we talked about plans. Their plan was to sail to Madeira, Canary Islands and Senegal, no further plans.
They had little sailing experience, they were just eager to sail out and see the world. They had learned all that is needed, celestial navigation, working with the sextant etc., but all on the land, no real experience.
After hearing that I did have the needed knowledge from being at the Nautical College in Holland and experience from sailing as a mate on ships, they asked us to sail together with them so we could compare our positions and stay in sight.

We looked at each other, my girlfriend and I and said yes, she thought it was an attractive idea. We liked Jean-Pierre and Monique and Africa sounded very intriguing. We made the decision to sail together, had their charts copied in one of Barcelona’s copy shops and off we went. We agreed to meet in Algeciras again.

After 2 weeks of coast hopping along Spain, we ended up in Algeciras to meet the French, who arrived the day after. Together we made some trips into the village on foot and back with a cab, loaded with food for the trip. 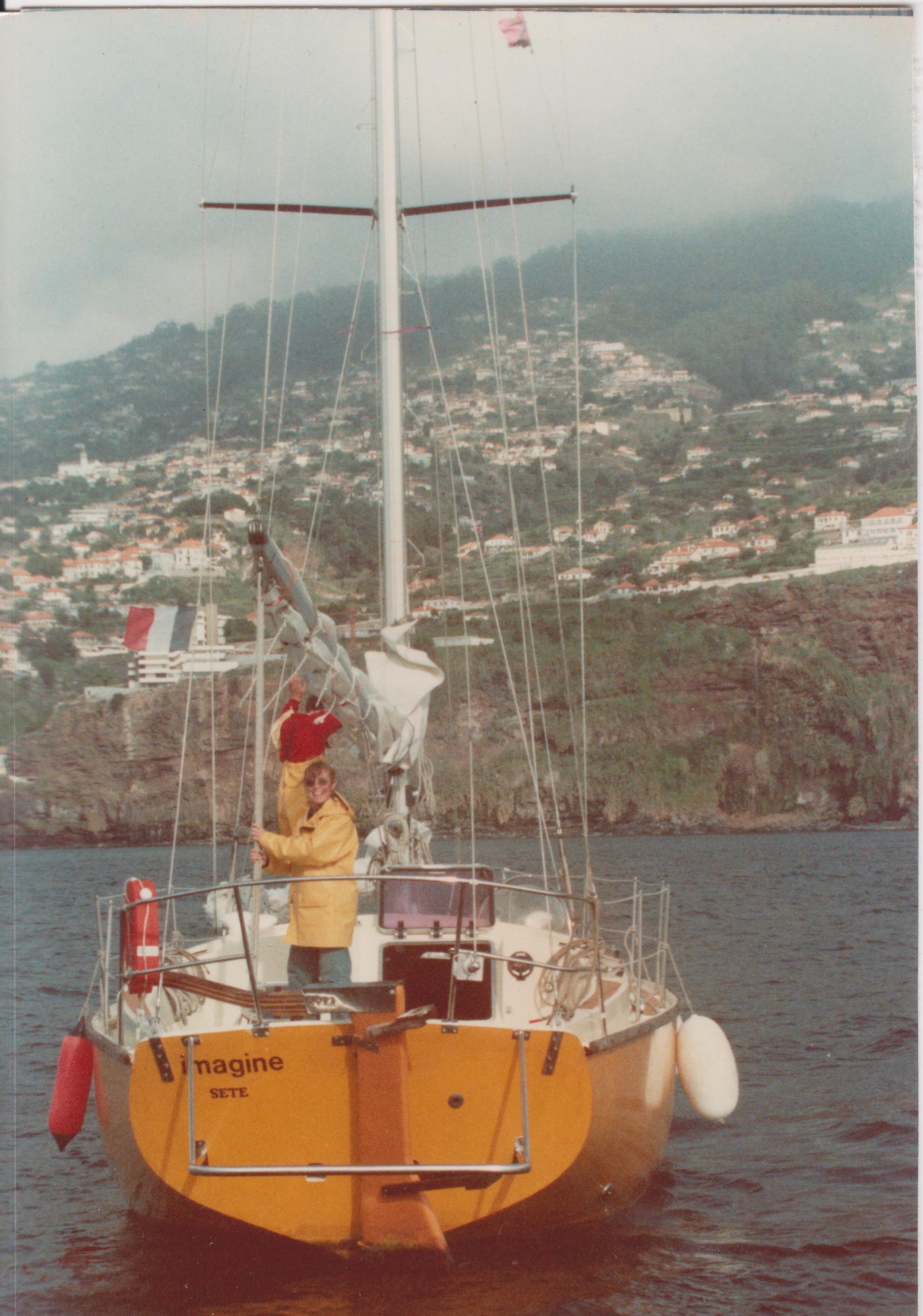 When the weather forecast gave some nice days we decided to sail to Madeira, where we arrived just before Christmas.
If you ever have the possibility to visit the island, don’t hesitate, It is absolutely gorgeous. Especially at that time of the year.

Here our roads parted, Jean-Pierre and Monique stayed longer on the island to meet some other friends, we continued on our way along the African coast.
Long story short, we visited Dakar, stayed 6 month on the beautiful Casamance river and continued down the coast and after a weeks visit in Ivory Coast, we arrived in Cameroon where we met a friend from Holland who worked there in the soap company.
Cameroon was worth a 3 month visit.

Then we had to make a decision again. Either going down the coast or crossing to Brazil on the other side of ‘the pond’.
The decision fell on the last. Brazil had some pretty interesting names: Rio de Janeiro, Copacabana, Salvador de Bahia etc
On the other side, it was 2.800 Nm, which is about 5.200 km sailing without seeing land. The ferrocement boat we had, was a bit on the heavy side and made only an average of 100 Nm/day.
After exactly 28 days we saw land again, precisely where we planned to arrive, the river Rio Paraiba. We dropped anchor in front of Joao Pessoa, where we met Brian.
Brian is an English guy who found his love in Brazil, married and started a small boat yard, building catamarans of the Jame Wharram type. At that moment he was busy with a Pahi 42, very impressive boat. He was well known in the sailing community as a kind of meeting point. Many leave their boat under his surveillance to make bus trips into the interior of this huge country.

We stayed 6 month in Brazil and discovered that our money was running out faster than we expected and jobs on the way were more difficult to get. So, we flew back home again to find a job and had two students sail the boat home. 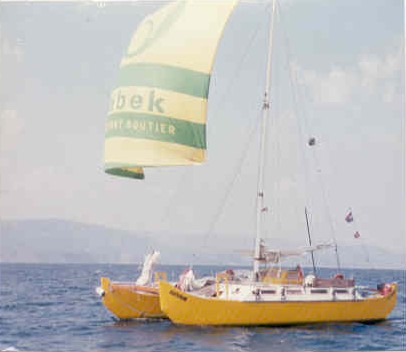 Ten years and many events later, I decided that it was time for a good sailing trip again. I bought a James Wharram catamaran Pahi 42 and the Danish woman that I was together with at that time liked to join me in my project and planned to take one year leave. Before that decision was made, we discovered she was pregnant which, in Denmark, means a long period of paid leave around the birth of the baby. Thanks for Denmark.

We had a very good sailor to join us in the first part of the trip from Stege in Denmark, to La Coruña in Spain. There he left us and we continued coast hopping to the south of Spain, Almerimar. The boat stayed there from october to february and we flew home to ‘collect’ our third crew member, my lovely daughter.

That’s the end of the story. We sailed through the Med, visiting many islands and bays and had a wonderful time. My daughter developed ‘sea legs’ before she could properly walk and in October we started “normal life” in a house in Denmark.

Sailing is an on and off thing for me, as you may have understood, I have a boat in periods and swap that life with boat-less periods. This has probably to do with focus on one thing at a time. 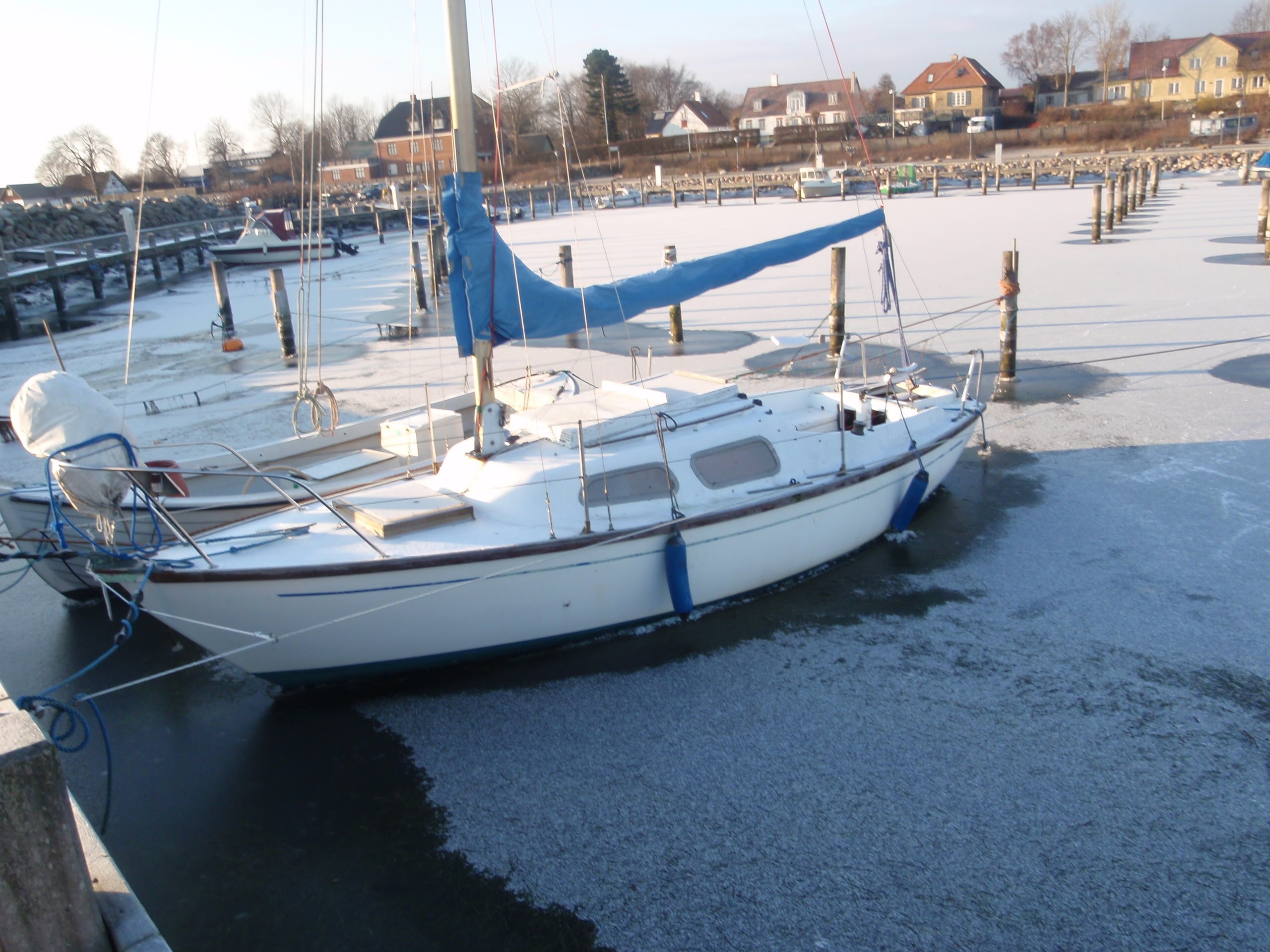 During this, 17 year long, normal life in Denmark, I became an active member of the Faxe Ladeplads sailing club and owned a Hunter 27 for some years.

In that period I also was a Youth Trainer for the Optimist group for about 3 years. 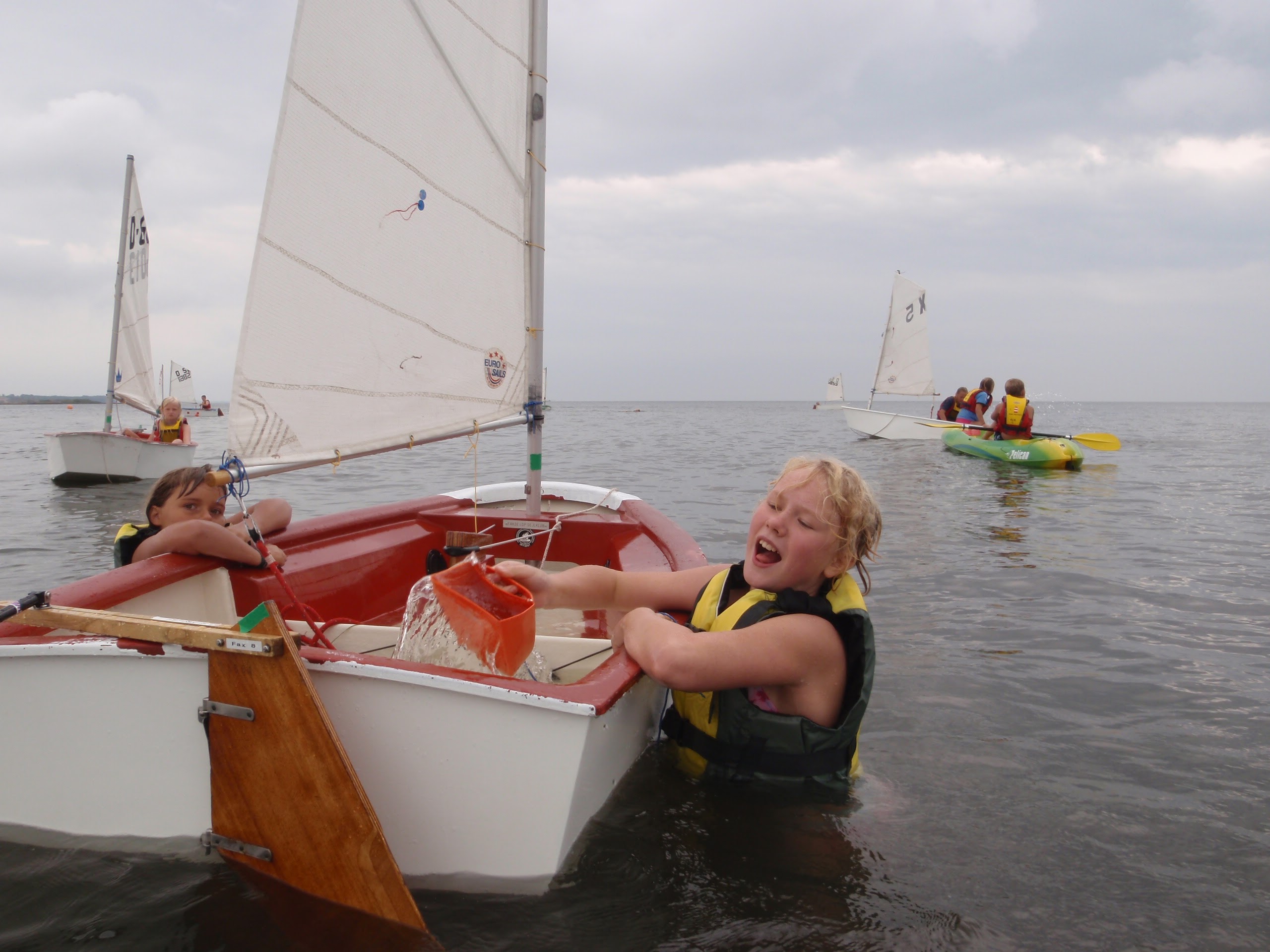 And then some day I became retired. Lots of freetime and question marks about what to do. Since watching TV will never be my main occupation, I started a Dutch pancake house. After all, we Dutch, we are good at pancake making and people all over the world love these things. I had this cafe for 3 years and after got the opportunity to stay in Spain for an extended period of 3 years on a Finca, managing the many volunteers they always had. On that finca I have built a straw bale house.

In 2016 I got the feeling of travelling again and converted a Renault Master to a livable camper. I had the idea that travelling by camper would be equally nice as sailing around, with the added advantage that I could step out and walk around any time.

Even though that in itself is true, I found the driving around very boring and started getting the ‘boat-feeling’ again. 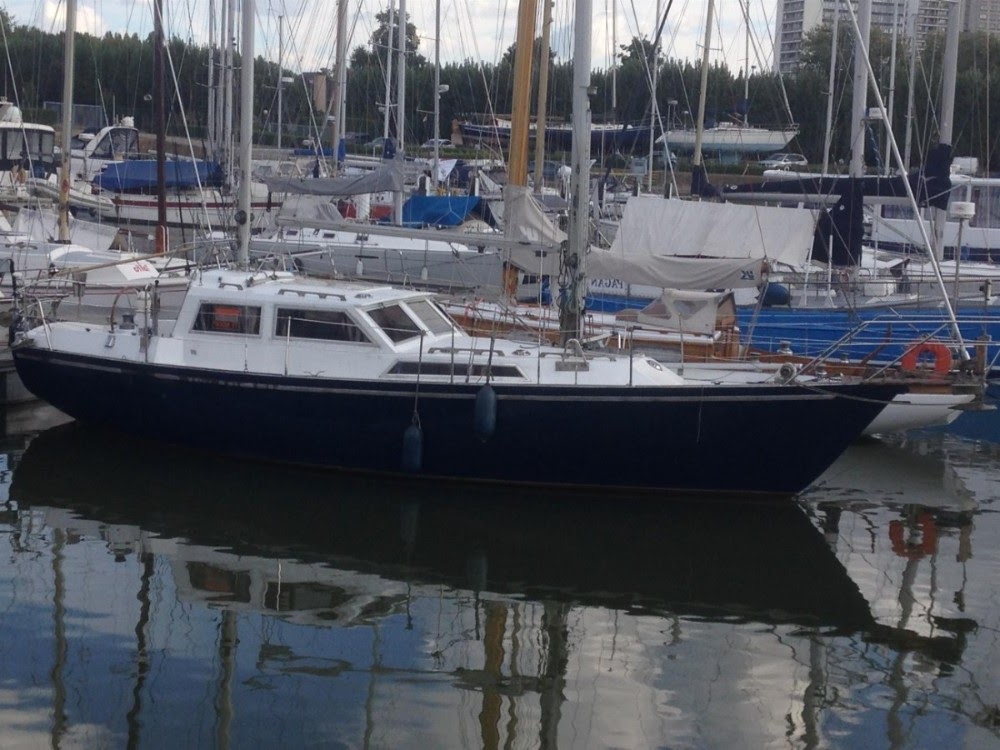 And when I discovered a Colvic Victor 34 for sale in Antwerp for a very affordable price, I was hooked instantly.

From the outside I knew the CV34 was a good boat. Heavy built, like it was common in the 1970th. I like these boats. It had a nice deckhouse with good size windows.

When we entered we saw a beautiful collection of old Saylor Units. RDF, Radar, VHF all nice and green like they were those days. They were as big as a modern fridge nowadays and of course I threw them out one by one. Fortunately I found a guy who was interested in that old stuff.

Now I’m more or less living on Zephyr, in Holland and in Denmark.

First we sailed it over the rivers from Antwerp to Hoorn, with some friends. Some preparation was done to bring her on a sailboat level. Then, in May 2017, I collected some volunteers and on Saturday the 27th we left IJmuiden on our way to Greece.

After 2 month of sailing and motoring we ended up in a very nice marina in Pylos. Actually, it’s not that nice. It’s desolated and horrible, but it’s a safe place. The marina was built about 25y ago and never finished. 1 water tap, no electricity, 1 old crane, but on the other hand, it’s for free.So, no complaints. 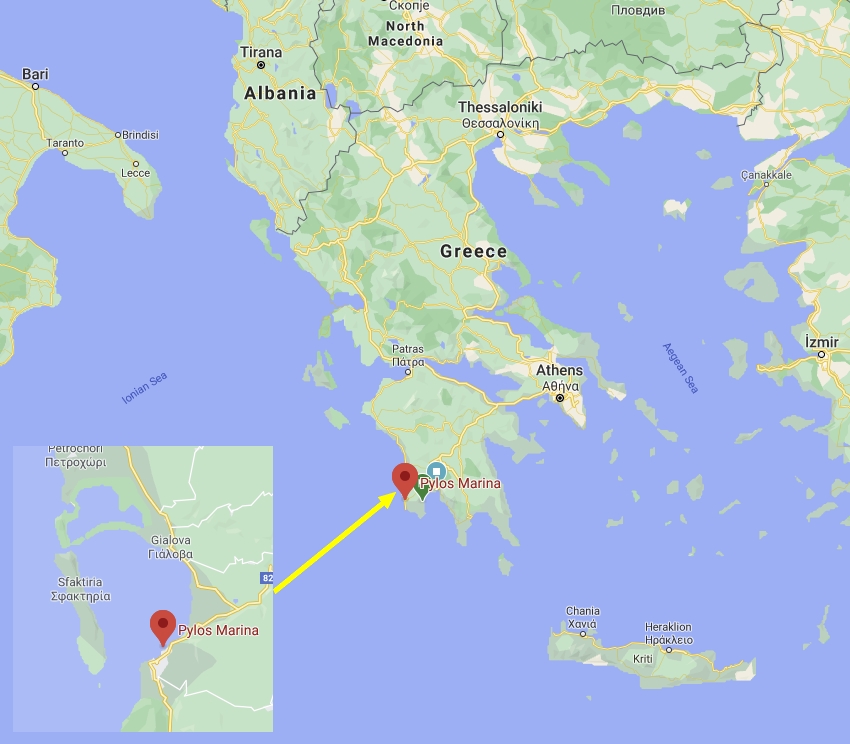 Since my arrival, Pylos has been my ‘home’ marina. Situated on the very nice bay of Navarino, with a lovely little town, which has all the things you need. A nice square, restaurants, shops and even Fotis who’s running a small chandlery.

It’s here I try to renovate the inside, rebuilding the pantry, changing toilet and bathroom and many more areas. I do this work mostly with volunteer people from various websites like helpx.net

I also sail from this place, either small funtrips into the bay of Navarino, or a few days to Methoni and Finikounda, or a more extended one around the whole Peloponnese.

If you are interested in volunteering and/or sailing with me, you can write me a message via the form on the right.